As we briefly touched on in the previous lesson, the concept of an expression is at the core of ClojureScript code. For programmers coming from a language like JavaScript, thinking in terms of expressions requires a shift in perspective, but like most aspects of ClojureScript, we will find that programming with expressions is quite simple once we get used to it.

Laying the Foundation with S-Expressions

Most ClojureScript code is represented with a construct called an s-expression. S-expression is short for “symbolic expression”, and the term comes from the old Lisp family of languages that inspired Clojure.

An s-expression can take two forms:

With just these two forms, we have defined most of the ClojureScript’s syntax. There is no special syntax for blocks, loops, function calls, conditionals, or almost any other part of the language. As we will discuss shortly, ClojureScript departs from most Lisps in that it adds a few additional syntactic elements to make the code more readable, but the simple s-expression is by far the most basic and prevalent syntactic construct. We will now turn to several examples of s-expressions.

At this point, we can begin to see that all of the parentheses serve a purpose after all (even this author had his doubts at first). They provide a consistent and explicit structure for evaluating any code. While other programming languages generally have separate syntax for function calls, math and logic operations, conditionals, method calls, etc., there is only one syntactic construct in ClojureScript, with clearly defined rules for evaluation. We will walk through the rules for how an s-expression is evaluated, but first, we will take a brief detour to discuss the emphasis on evaluation of expressions rather than execution of statements.

Being a functional programming language, ClojureScript emphasizes expressions rather than statements. That is, everything in ClojureScript evaluates to some concrete value. Whereas JavaScript allows statements that do not yield a value and functions that do not return anything (rather, that return undefined), every piece of ClojureScript code - from a simple number to an entire program - is evaluated to produce some value.

Let us consider some JavaScript statements that are not expressions and do not return anything:

In each of these examples, we see a piece of code that performs some computation, but it does not give a specific result. One way to think about it is that if we put a const foo = before any of these statements, it would lead to a syntax error, as in the following example:

In ClojureScript, on the other hand, there are no statements, only expressions, so absolutely everything has a value (even if that value is nil). This simplifies things quite a bit, as we do not have to divide the language into expressions, which evaluate to some value, and statements, which are executed, not evaluated. Everything has a value. Below are the ClojureScript equivalents of the JavaScript statements that we just considered.

Imagine building a contact list app, and you would like to display the number of users missing phone numbers somewhere in the UI. A typical way to do this in JavaScript would be to create a counter variable then loop through the list of users, incrementing the counter if the phone number was missing. Finally, the contents of some element would be updated with the value of the counter.

This code reads like an instruction manual for the computer to follow - a list of things to execute in order to accomplish some task. When programming with expressions, on the other hand, we think about the data that we have and how we can derive from it the value that we are interested in. In this case, we have a list of users, and we are interested in the number of users missing phone numbers. With the expression-oriented approach, we would probably do something like the following, which creates a filtered list of users - containing only those missing a phone number - and then gets the number of items in that filtered list.

In addition to being shorter, this code draws a clearer connection between the data that we start with (a collection of users) and the data that we want (the count). Interestingly, the entire expression above evaluates to the number of users missing phone numbers. 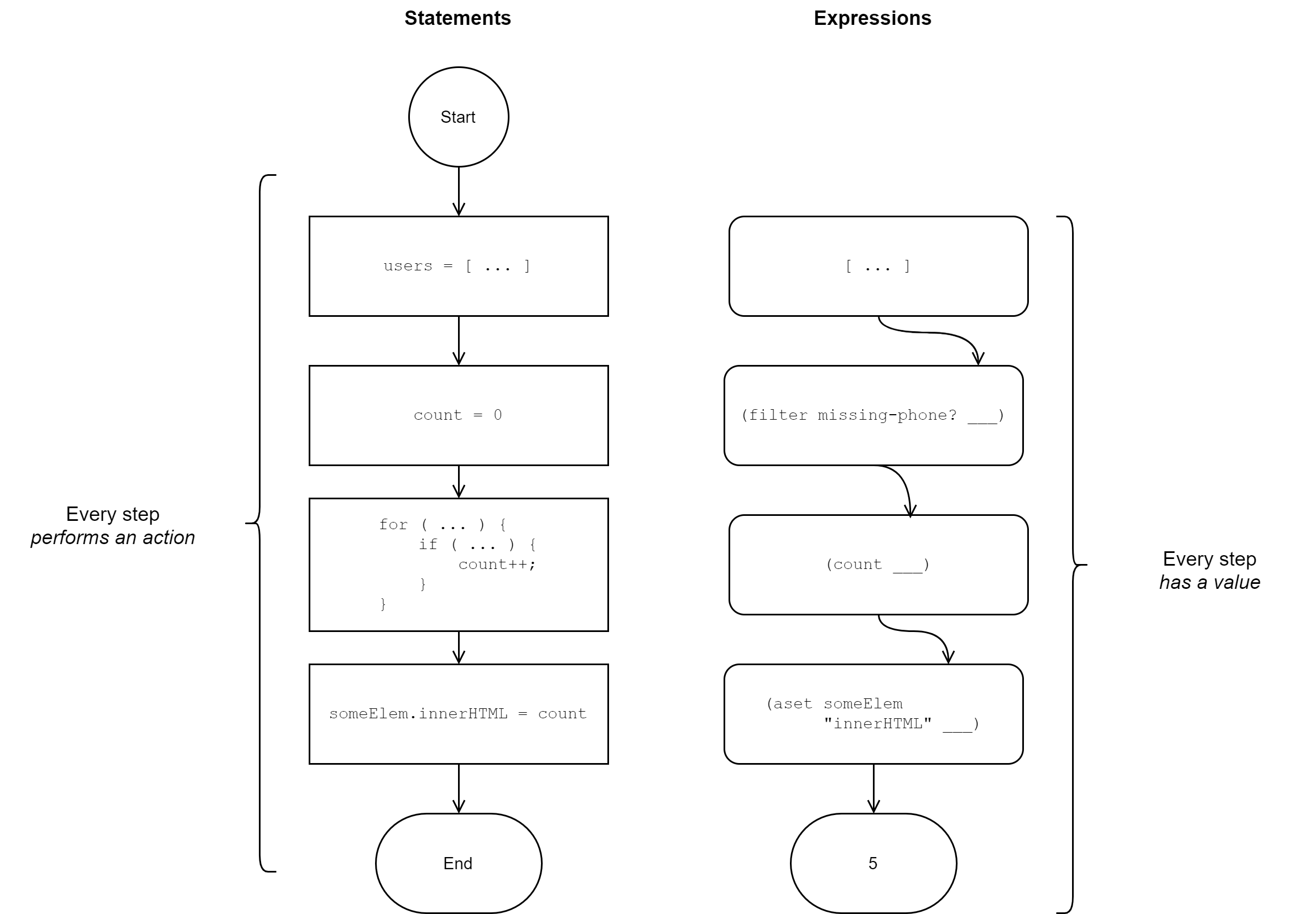 We see that the expression-oriented code returns a value at the end. However, since each expression is composed of other expressions, each step in the process has some value. Now that we have a good understanding of what expressions are and how they differ from statements, we can dig into how ClojureScript evaluates (derives values) from expressions.

For each of the following JavaScript code snippets, identify if it is an expression or a statement:

As an example, we will look at the expression, (map inc (take 5 (range))). This s-expression is a parenthesized list of expressions, so the first element, the symbol map, is interpreted as a function with 2 arguments: inc and (take 5 (range)).

inc is a function that takes an integer and returns the next-higher number. ClojureScript can call this function directly so this argument does not need to be evaluated. However, the argument, (take 5 (range)) must be evaluated so that its value can be passed back into the map expression. Remembering the rules of s-expressions, we can see the ClojureScript will interpret take as a function with 5 and (range) as its arguments. 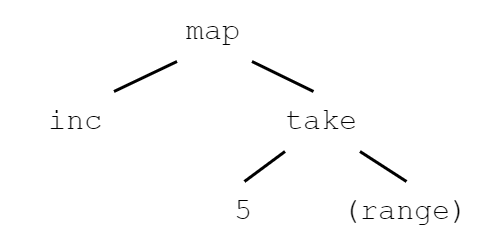 The original s-expression is almost ready to be evaluated, but first, we must evaluate the final inner s-expression, (range). This s-expression has only a single expression inside it, range, so it will be interpreted as a function with no arguments. 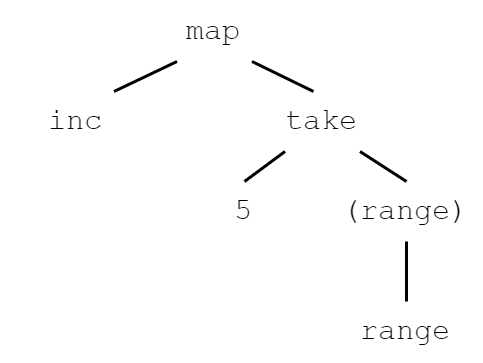 Finally, the expression will be evaluated “inside out”, starting with the call to the range function and working outwards to the outermost s-expression.

Finally, the last step of the evaluation is performed, calling map with the arguments, inc and (0 1 2 3 4). This increments every element in the sequence, and returning the final value of the s-expression.

The rules of evaluating ClojureScript are simple enough that we could work out in a few steps how an expression is evaluated. The amazing thing about this is that no matter how large and involved the code that we are looking at, we can use the same process to read almost any piece of ClojureScript. Once the basic syntax is understood, most of what remains to learn is the vocabulary and common idioms.

It may come as a surprise, but ClojureScript has no concept of operator precedence. That is, there are no rules indicating that multiplication should be performed before addition or any such thing. Instead of having a set of rules that implicitly determine the order in which to evaluate an expression, we specify the order by how we nest s-expressions. For example, the following code multiplies 5 and 2 before adding the result to 10:

On the other hand, the next bit of code adds 10 and 5 before multiplying the result by 2:

The use of parentheses to determine the order of operations forces us to be more explicit and virtually eliminates the entire class of bugs related to operator precedence.